It has been some days since my last post, I admit that. But the truth is, once you actually start living here in Cameroon, you tend to become really slow, primarily taking the actual walking/working. With my rather long legs I overtake everyone on the streets just to find myself completely exhausted at the bottom of the road. You don’t run here, as long as you are not working out. Walk slowly and eventually you will get to where you want to be. It is due to the extreme heat and high humidity that putting your body under extreme conditions seems rather useless. The blood remains warm no matter what, so walking slowly really helps!

Life here in Buea couldn’t possibly go any slower, or we’d start moving backwards. My working day (if that definition is really accurate) starts somewhat around 9ish and ends when…sort of when I feel like it has to end for me. We are 4 people sitting at a big table, all more or less desperate for the Internet to facilitate our work, but since we got a decent connection installed in our house last week, my normal working day became a 24/7 issue, with being online as much a possible (that is, if the frequent power cuts wouldn’t hamper the process). The power cuts occur around once a day, and normally wont last much longer than a few minutes. Last weekend, however, a heavy (heavy for me as a German) storm made its appearance right on top of our small house and caused a widely spread power cut for more than 10 hours, leaving us in the dark with no coffee…  🙂 On Friday evening I went out with Tom, Captain (the producer of the music Tom is using for the HIV/Aids project) and Abigail, one of the artists for the same project to see a concert up in Buea Town. The music was really nice and even though I mysteriously lost 30,000 franc (about 45€) while attending the concert, I will keep that night in good memory.

We spent my first Sunday in Cameroon visiting the market of Buea, buying amazingly fresh veggies and fruits (half a pineapple of about 30 euro cent!)  and witnessed the most disgusting sort of meat and met storage I ever came across.  Let us play a game: who can guess what part of the body do you see on the picture below? 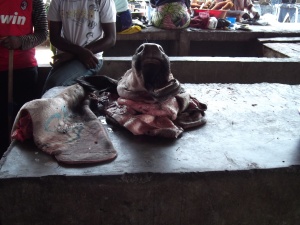 At the local market - kinda wanna make u become a Veg straightaway, he!

The overall experience was breath-taking and I am sure we will make it a weekly tradition to go to the market, while the rest of the country is spending literally 8h in church! Going to the church will also be part of my agenda at some point, but for now I don’t see myself spending hours dancing and singing… The same night, we were having a nice barbecue outside with a self-made grill, using the nearby banana leafs to make the fire. We had grilled and roasted vegetables and potatoes and even though the others liked the meat, I am sure we’ll mostly have vegetarian food in the future, woohoo! I am having a day off today (and maybe also tomorrow, as it will be Woman’s Day which is being celebrated here to a much wider extent than in Germany).

One thing that is quite annoying is the way my mind is responding to the anti malaria pills I have to take once a week. I am having severe nightmares every other night, something I haven’t experienced yet. I will quit the writing for now but publish some images I managed to capture during the last few days. 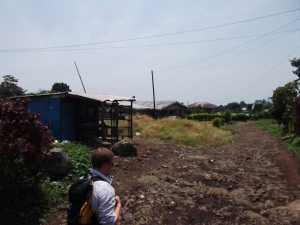 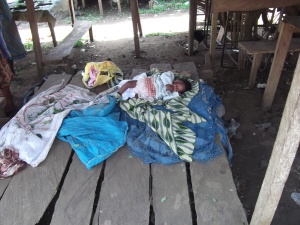 A tiny baby sleeping at a sun-covered stand at the market. An image I just HAD to take... 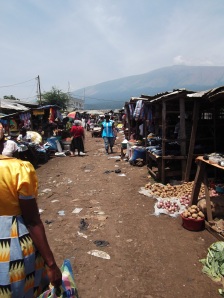 At the local market with the spectacular view at Mt. Cameroon in the far distance 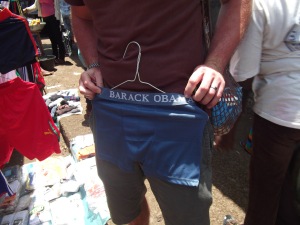 Someone seems to be working on a career after politics..

Traveller and Writer - none of 'em uber successful! END_OF_DOCUMENT_TOKEN_TO_BE_REPLACED
This entry was posted on Monday, March 7th, 2011 at 18:04 and tagged with Africa, Travel and posted in Buea, Cameroon. You can follow any responses to this entry through the RSS 2.0 feed.
« 48 hours in Cameroon: First impressions and my first day at work
Anno 2011: Do’s and Don’ts in Cameroon »